Unfortunately, we’re twice late with Horace’s test: this game was released for PC in July 2019, (technically flawless) switch activation was followed in October 2020. Unfortunately, with some indie titles it is difficult to implement, and should always be at the beginning of the test immediately – which is why we have been officially discussing games that will be available longer than this year from the beginning of 2021. The title has been waiting on my switch since November 2020, and I finally picked up the title from mid-January. Luckily I did – because Horace is an extraordinary video game in many ways and certainly one of the most exciting in recent years! On top of that, it is comprehensive and sometimes very demanding: I swear a lot at times, but I was always very motivated and eager to come back to the pad almost every evening. But what is it really?

At its core is the Horace 2D platform adventure, which has a lot of story and regular brain teasers. However, it’s more than that: Horace sometimes tells an emotional family story about war and peace, friendship, betrayal or the meaning of life, bank robberies, time travel, video, and so on. Games or garbage collection. Sounds weird, it is. Mostly so! It all starts with Delivery and the humanoid robot entering Horace into a mixed family: beautiful, but not overly beautiful pixel graphics, you enjoy Horace’s first days and missions, he gives a special touch to many of Katzkens with his tinny, providing an insensitive computer voice. For example, I’m learning to control and do a few simple game dynamics at the gym, where the family has set up a small jumping park for me: Horace lined up the “abysses” of red pieces to make clear where to go and where not to go. Horace, aptly, mentions that it already looks like a deadly volcano. This is one of the first contradictory references, especially to video games or to pop culture in general. Later, Horace plays a kind of pong against the family man, is allowed to visit the local arcade in the big city, plays a beautifully republished arcade classic, and finds beautiful notes again later in the game video games.

See also  Speaking of: What are you playing this weekend? (October 31) 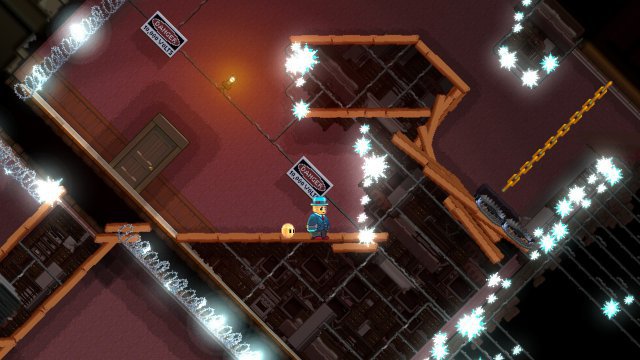 Platform challenge, electric traps and brainwashing – if Horace goes over the wall, the game perspective will change.

In any video game I have experienced such different, multi-layered and insane things: Horace rescues the daughter of a family who fell on a rocky face, swims through deadly obstacle courses full of round trees and electric fences, drives an escape car, earns money in mini-games, a Messi girl in her garage Helps to evacuate, escapes from a tidal wave into sewers, competes many times in duels against giant war robots, escapes kitchen equipment upside down, messes with the Queen of Hearts of Wonderland, combs through pixelated dungeons full of enemies, participates in the local church festival. Participate in competitions and dismissals, be crowned king, play basketball, master a shoot ‘pass, pile up a family of monkeys before prehistoric times, save a family from burning house, play drums, solve laser puzzles, discover passwords Sprints are like Sonic around the world, taking a trip to our Earth satellite, taking snapshots on the photographic engine, disconnecting the train through the south of England, exploring the meaning of its existence, walking through dark corridors at first glance, and running in exaggeration on a burning Ferris wheel. Among other things! What you experience in 15 to 20 hours leading up to heart-wrenching credits is really crazy. Again and again one asks: what more is to come? What is your next wild task? Also: How do developers come up with it?

See also  Nintendo: Historical history may be back, a poll makes fans dream