There is television Koh LantaThere’s the Nintendo Switch Instant game. Funny comparison you will say to me, but if we lean a little more in this matter, we notice that there are almost too many new seasons. Koh Lanta Only again Instant game. After summer sports, tennis, winter sports or mini games in paradise island, we find immediate Game All Stars This method tackles games to us. What is this new iteration? Party game From Leon Studios Break first ?

An adventure mode that doesn’t deserve a great adventure 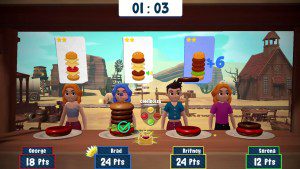 with Instant Party: All-Stars, Break first Watching the game to us American football, soccer, baseball, basketball, Olympic shooting, speed ice (an activity based on food, where we have to stack different objects…yes, yes, I promise), hockey and finally bowling (in five and ten rounds).

When we get to the menu, we are presented with a nice surprise: the presence of an adventure mode. Well, this method will quickly disappoint us. In fact, we may have expected to create our character and go through it Map Or was able to propose a semi-open world, a bit like Mario Tennis Aces Where Mario Golf Super Rush. But it was nothing. Instead, we have a list of twenty-four events, each consisting of three to four mini-games. By completing one event, we automatically unlock the next, regardless of our final rank. These events can be played against or as a team, against the AI ​​or with up to three people around you. 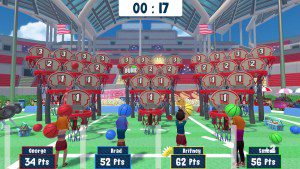 Apart from that, the title also gives us a “quick play” mode. Here, we can practice eight games or should I say activities (there are nine possible choices as bowling has two choices namely five and ten rounds). Each action offers three levels of difficulty as we progress through Adventure Mode. Note, however, that it is not necessary to complete Adventure Mode to access all of the “Quick Play” mode choices. Each can be played alone or in a group of two, regardless of the game mode selected.

See also  Nintendo Player | Monster Hunter Rise: Running the demo will provide a set of items throughout the game

We’re not going to lie to each other, full point Instant game Available in multiplayer. This is multiplayer OfflineSo you need friends.

New game, but a mayonnaise is difficult to pick up 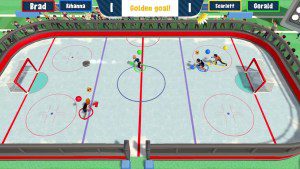 Unexpectedly, Instant Game: All Stars Based on these games to us To give us small games with very varied interest. The presence of difficulty levels makes it a little more interesting, because different activities offer variations, for example baseball, some balls get stuck and it shows more or less quickly.

A little extra that appeals to the little ones: the shop. In each opus, during our games, we receive gold coins, which allow us to unlock clothes and new heads for our avatar. Of course, everything is won in the game and there is no need to go back to the cashier to get these popular gold coins.

A question arises: should we use Motion control Or the good old joystick?

You should know that out of the eight activities offered, only five do Motion control, i.e. American football, baseball, basketball, Olympic shooting and bowling. At least we can say that for some sports like baseball, bowling and basketball and US football. Motion Gaming Very suitable. However, Olympic shooting is playable Movement-control It’s a refinement, very heavy and unresponsive (it’s a bit better on the controller, but still not there).

It can be younger and more entertaining. Nothing beats a good controller.