Microsoft has just released Update September. Available now, it weighs over 700 MB and allows you to take advantage of new features such as the new Microsoft Edge browser directly on your console.

If the update does not start automatically, you can go to Settings / System / Updates and force the download. Details of all the innovations can be found below.

New in this September update is the arrival of Xbox Cloud Gaming in new media. Previously reserved for mobile devices and tablets, now you can enjoy cloud-compatible Xbox Pass games directly on your computer.

To do this, you need to go through the Xbox app, which can be downloaded directly from the Microsoft Store to your computer. If you already have the app, it will be updated to support the features of this new version.

Xbox Cloud Gaming (Beta) is now available through the Xbox App on Windows PCs for Xbox Game Pass Ultimate members in 22 countries. Cloud Gaming allows you to quickly access games without downloading on your Windows 10 PC, iOS and Android devices.

In addition to the Xbox Cloud Gaming Games available on PC, this new update for the Xbox Application Xbox Series X | Allows you to enjoy console streaming with S. In fact, if you can already stream your own Xbox One console, the new consoles provided by Microsoft are not yet supported.

Remote Gaming Your Xbox Series X | Lets you play S or any generation Xbox One games on the internet on your Windows PC. This is a way to reflect the entire experience of your console on another screen: browse and play your entire game list, change settings, interact with your friends and much more …

The September update is an opportunity to take advantage of all newer versions of the Microsoft Edge browser on the Xbox. Tested for several months by internal members, so the chromium-based version of this browser is officially available to everyone.

In the program, you can now access smooth navigation and some services such as Google Stadia or Discord, for example. This version of the Edge will be installed automatically when downloading the new Xbox update.

With improved web standards and a faster, safer and more modern browsing experience from your console, this update will bring you the best web. You will experience a more streamlined gaming experience on all your connected devices. If a game for tips or guides opens a new window in Microsoft Edge, send that tab to another connected device so you can play seamlessly on your console. This update also supports mouse and sync, so you can easily manage your profile settings on the Microsoft Edge on your Xbox console.

Finally, a new “Play Later” tab is available in the Xbox GamePass table. This allows you to easily save topics there to try later, and get suggestions.

Do you see an interesting game? Save your list and then play. If you do not have anything on your list yet, we will show you how to use it and give you personal suggestions for games to add to your list. 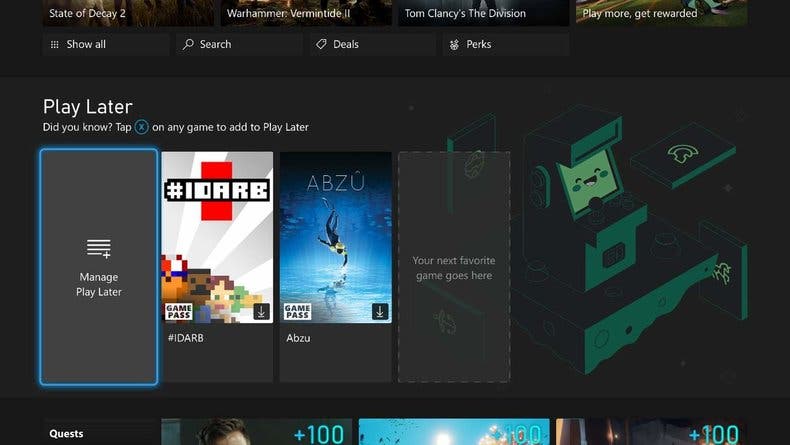