To be fair Baguio: Champions of Vestroya, One of the things Fair Before being introduced to a world, it seems like a decent start, initially, looks and gained some of its capabilities by immersing the players themselves in a character-creating set. It is a bright and colorful game, crisp, clean art-style and some great beasts to collect. However, things begin to fall apart quickly as dull opening cinema fails to explain how or why there are so many scraps with a large alien monster, and it soon reveals that it is completely devoid of a life or fun side action. The main pagan-fighting action of the game. 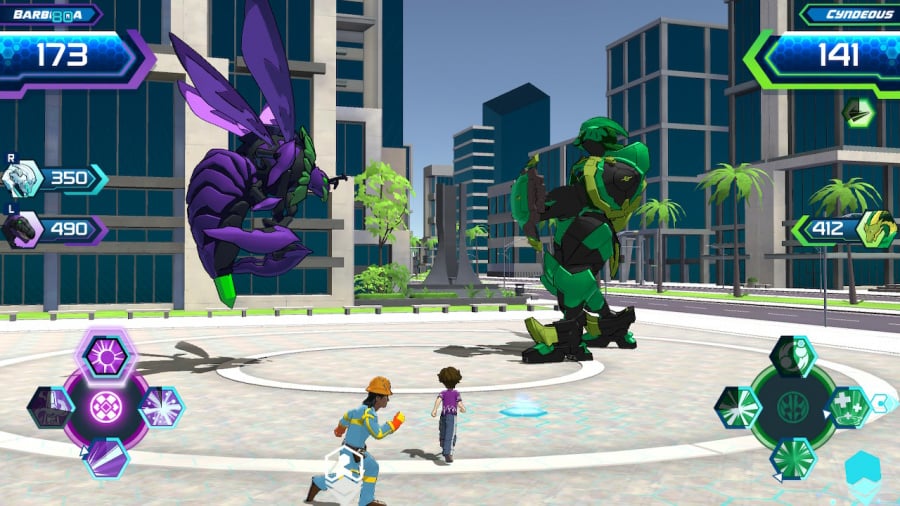 What about that fight? Well, for a game that collects its list of creatures and how fun it is to get them down in scraps, Baguette: Champions of Vestro will not shoot itself in the foot on almost every occasion. The fights here you will find working with a team of three sidekicks, you will mainly gather through side missions and go against an AI team, expelling it by activating one of your four selected pacifier skills at a time to attack your opponent. Submission. Skills must be charged before they can be used, and to do this you need to move fast around the arena to pick up neon charges from the ground, which are then automatically absorbed by the currently activated organism.

It is an odd system that does nothing but run in steady circles in a race to pick up charges in front of your opponents, while your pagan stands in the background, the forces waiting badly for you to execute one of them, sometimes half-heartedly swiping at its opponent in a failed attempt to be interested Or staring into the distance waiting for the sweet release of death. The whole thing feels disgusting and awkward, and soon becomes exhausted to the point of real irritation.

See also  Nintendo discusses a return to Brazil, revealing that it should not bring physical sports to the country; See also - Re: Jerusalem

Taken on its own, it’s fair to try to catch these little minicom mechanic charges, however, it’s a death knell here because the moves you try to execute are dull, have no tactics and the animations come back again and again, in many cases we retreat to the menu and actively look for a way to avoid them. The fights here, even for the young spectators they target, have nothing to do with the novelty of the first hour or the turmoil once worn once. They are also incredibly long. A pagan fight usually runs for about ten or more minutes, while all you do is run through the circles, activating some of the same forces and having a hard time sitting through the ad-nausea of ​​the same animations. 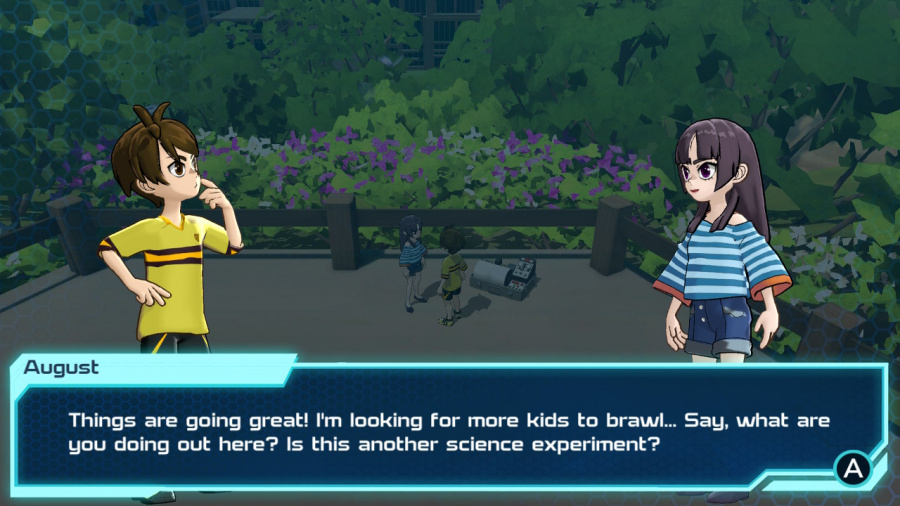 There is a real laziness to those animations too and you will start watching it once you see them a few times. For example, our Cyrus Pagan has a parrot move that acts like its shutterfist attack, striking – to bite – by swiping its claw, meaning that a gas and teeth are hidden somewhere in its mouth or that Wayford does not care to create unique animations for each skill. The skills you work with are overall very sluggish, and you may find little reason to change them as the slow campaign progresses. There are some weird attacks, beast restorations and bug fixes for the beast to suit your enemies, but all of these are pathetic simple things and you can either ignore your most powerful move in favor of smashing it again or unleash a group attack that doesn’t even charge all of your pagans to the maximum.

In addition, once you have leveled a patch to a specific location, you can press a button to create them, which should be exciting and will lead you to transform yourself into a super attractive version of the creature of your choice. Except here it doesn’t happen. Your pagan looks the same after evolution, gains little health and strength, yes, but has not changed a bit aesthetically. It reconsiders cutting the corner, and it continues its head in the quality and quantity of pagoda offered here.

Divide evenly between the five elements of Darkus, Haos, Ventus, Aquos and Byrus – initially it seems that there are about eighty unique beasts to get a handle on, and there are sixteen monsters in each of these basic groups. However, as soon as you start to open things up you will quickly realize that they are actually coming back again and again in each group, giving you a total of sixteen beasts. This big problem is exacerbated by the fact that every creature within a basic group can use every one of that base group’s unlockable abilities – there are no specific negatives or positives assigned to a particular group within a group, so there is no reason to choose one over the other, or collect them all within your team Denies any point behind bothering to change. 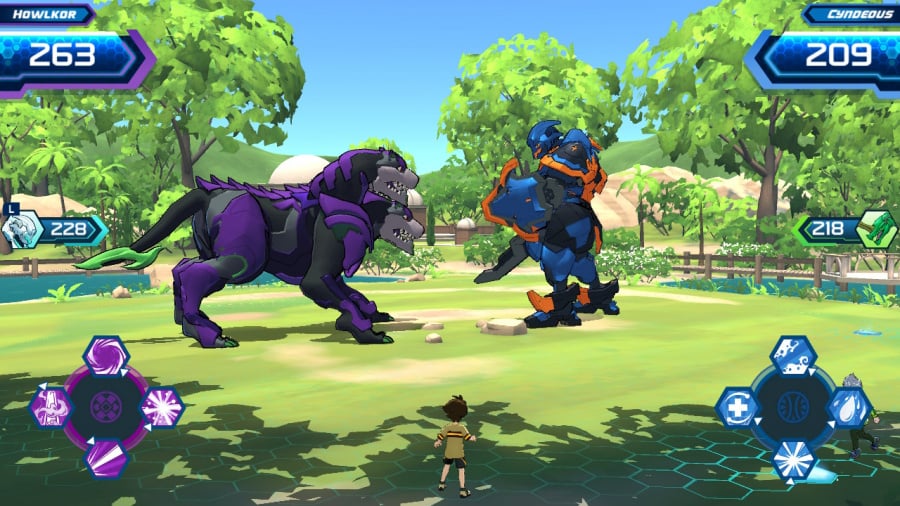 It is very difficult at first to understand why a game based on collecting monsters would have to fight with them, which would make such a small effort to provide a reasonably large or varied list of creatures that can be collected in a compensatory battle or capture warriors. But you begin to consider the poor quality of the dialogue, the humorous basic side journeys, the empty, barren world map, which are small repetitive parts that are completely absent from life or the atmosphere, and you are pagan: a vicious bond that binds together like Champions Vestroya.

Even the multiplayer component of the game is one of the most slapstick, quick and basic offerings we have come across over the years. Jumping on this page of things you were given with the option of engaging in a quick battle against a stranger or confronting a friend. You can see that there are no options for changes, no mode differences, no choices, and once a competition starts, there is not even a basic balance in the process. You will get complete beginners with the war, in battles where they are four or five times smaller than you, there is absolutely nothing in the tactics about them. Simply run, collect bills and smash the capacity you want until it is finished. The strongest team on paper always wins. 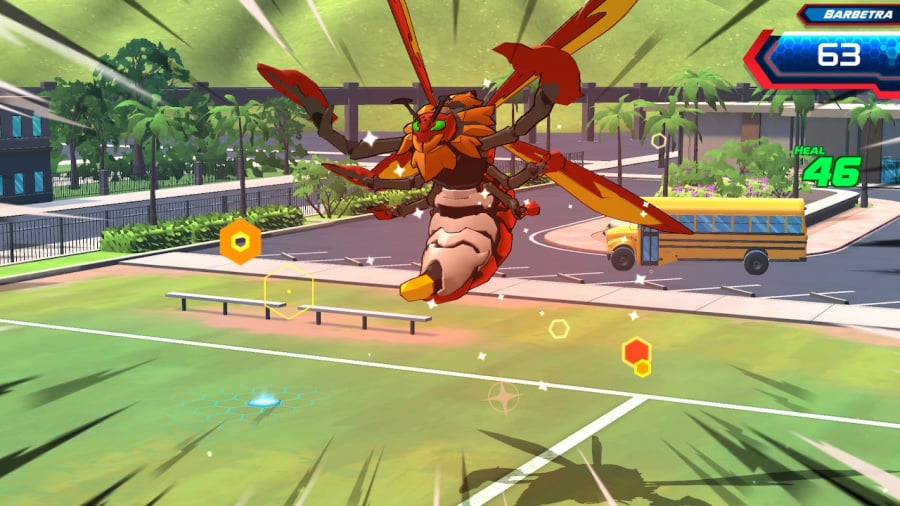 On a very positive note, in terms of performance, it’s a decent game with crisp and colorful displays, which translates well to Switch’s portable screen. We noticed a few small framerate drops during the attacks in chopped mode, but overall, one area where the Vestroya Champions champions can hold their head high is how smoothly they play in the chopped and small modes here. Other than that, unless you are a big pagan fan or want a game you can play while fast asleep – this is a Pokemon rip to be avoided; A lazy and repetitive game, it reveals very quickly whether it is longevity, lack of tactics or charm.

Baguio: Champions of Vestroya have long sought to target young players in the Pokemon Lets co-style affair, but it does so with absolutely zero care or glamor. It’s a lazy, repetitive, basic game, slowly eroding goodwill with your patience and slender dynamics, as well as a world with a small list of monsters and revealing complete absence from character or life. Avoid.